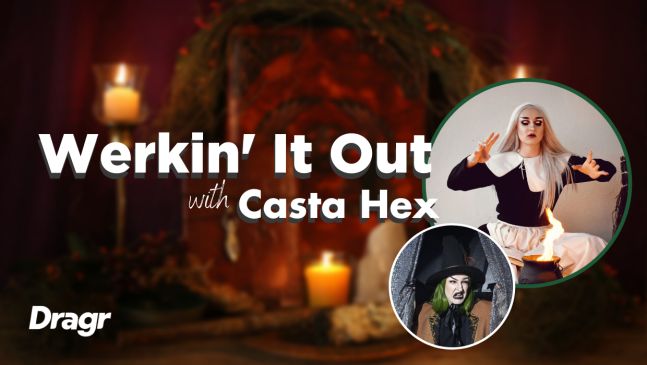 This week, we got to know a bit more about Casta Hex – the self-styled Wicked Witch of the Southeast. This entertainer opened up to us about what makes them tick, but also gave us a glimpse into the pagan side of drag.

Casta Hex is an artist who works hard to create a clear vision and connection they never fail to share with their fans. Thankfully, we got to take a look behind the curtain and learn more about what makes this artist unique, as well as what inspires the incredible art they bring to their fans time after time.

Find out more about Casta in this week’s “Werkin’ It Out“.

Werkin’ It Out (with Casta Hex)

1. What inspired you to start doing drag?

What inspired me to start doing drag was always the desire to create characters and embody them. I love to design and make my own costumes and sometimes I’ll be sketching for hours fantasising about looks to craft, numbers to put on, personas to become.It’s a creatively fulfilling hobby and a burgeoning career.

2. If you were stranded on an island – and had to pick 3 other drag artists to take with you – who would they be?

If I was stranded on an island and had to choose any other drag artists to take with me one of them would be my drag parent Eileen bothways who I couldn’t live without. The next would be jinx monsoon because we’re both witches and I feel like we’d have fun geeking out about Harry Potter. And the third would be Max because they seem super chill and are ridiculously hot lol.

3. What country haven’t you visited (that you’d love to)?

My favourite song of ALL time is ‘Seven Wonders’ by Fleetwood MAC, it’s such a good song. It has a crazy synth backing, great beat AND weird slightly magical lyrics.

I can do a MEAN crab onstage, plus I have been known to pour petals out of hats and gloves onstage and I once stabbed a bible which bled and I licked the blood up…ewww right?!

6. How’d you get your drag name? Is there a story behind it?

my drag name came from the monster high doll ‘Casta’ and the last name was inspired by the Hex girls from Scooby Doo and the witches ghost. Plus I wanted a witch based pun, and I like that hex rhymes with sex.

7. If you weren’t doing drag, what would you be doing?

If I wasn’t doing drag I’d be making costumes. My muggle job is a costumer/embroiderer for film and TV and I’ve recently been working on two new shows for HBO; as well as Making costumes for Drag queens like Victoria Elizabeth Black and Virgin Extravaganzah AND collaborating with Misty Couture on a new embroidered line of custom corsets. I’m a busy lil witch.

8: If you could click your fingers and have one thing done for you every day, what would it be and why?

Ugh! For sure having my bedding changed. I love crawling into clean sheets in clean pyjamas, it feels so crisp and like a delicious new bed.

9. What is the wackiest, weirdest or most cringeworthy thing that’s ever happened while you were performing?

worst onstage experience was whilst lip syncing to cherry pie by warrant whilst dressed as Julia Child…I slid down a stage wing all sexy like…doing a little kick which promptly jettisoned my shoe off and into the waiting face of a crowd member…ouch!

You can keep up with Casta Hex’s upcoming gigs and streams in the app – which is now available on Android an iOS. Miss our last “Werkin’ It Out” interview? Find it here. Artist that wants to be featured? Get in touch. You could be the next amazing drag artist to be featured in Werkin’ It Out!